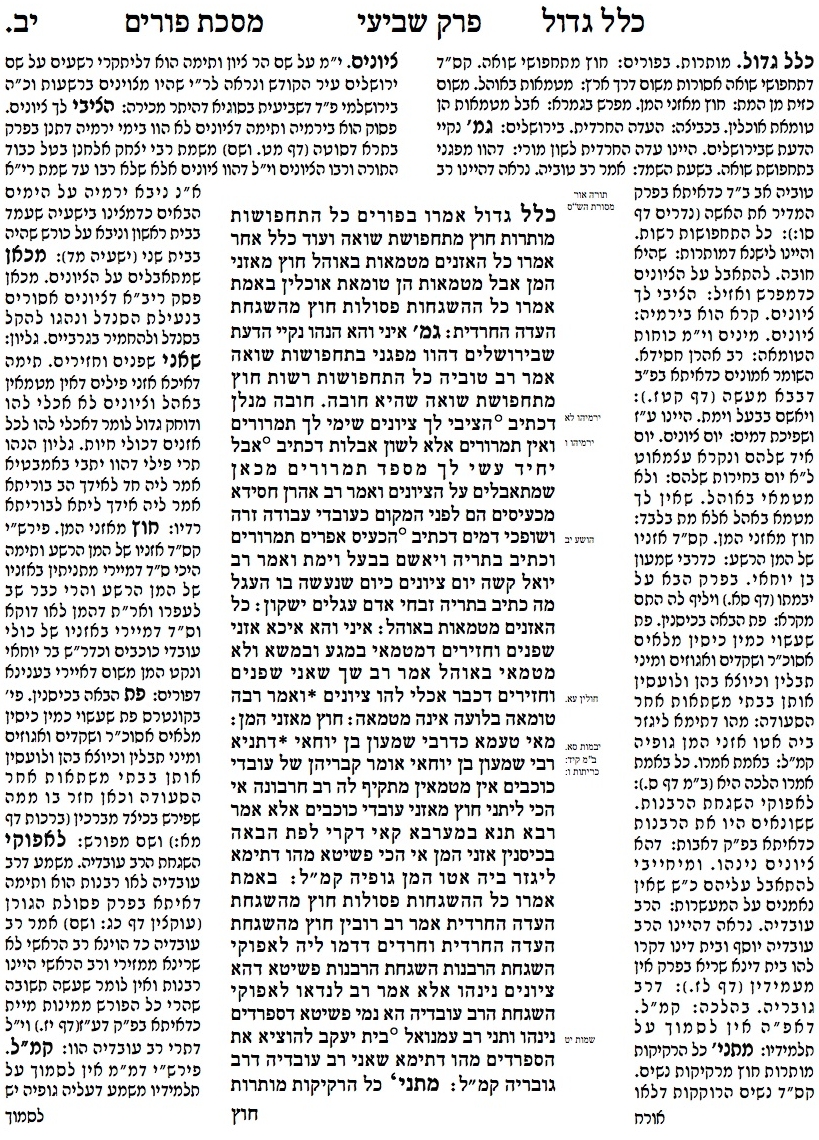 
The mishna reads as follows: “They state a rule in relation to Purim: all costumes are permissible except for those of the Holocaust. They state another rule: all ears convey impurity in a tent save for the ears of Haman, although those ones do convey food impurity. In actuality, they said: all rabbinic supervisions are invalid, save for that of the Eda haChareidis.”

The terminology here is reminiscent of the actual Mishna (“they state a rule”, “they state another rule”, “in actuality”, etc), and the content of the second rule pertains to an area of legislation that concerns the impurity conveyed by different types of corpses. Something’s being “in a tent” (either together with you, overhanging you in the manner of a tent or being underneath you with you forming a tent, so to speak, over it) is one of three ways that corpse impurity can be conveyed. The other two are those of touching something and of carrying it (perhaps upon a tray).
The subject matter of the first rule sets the scene, being reminiscent of a political stunt at the conclusion of 2011, in which haredi children were dressed up as victims of the Shoah in order to protest the state’s treatment of its ultra-Orthodox citizens. The Rashi-style commentary on this mishna is for the most part straight to the point, but the explanation of this ruling (that all costumes are permissible except for those of the Holocaust) is brilliant: “you would think [based on this mishna] that those ones are forbidden due toderekh eretz” – a term that denotes tastefulness, propriety and the acceptable social morés of our society.
On the contrary, the gemara commences by asking a question: Is this so? Behold, the pious ones (נקיי הדעת; Rashi: “the Eda haChareidis”) of Jerusalem dressed in Holocaust costumes! Rav Tuvia says: “All costumes are permissible except for those of the Holocaust, which are an obligation“.
As the Rashi-style commentary explains, Rav Tuvia is a reference to Rabbi Yitzhak Tuvia Weiss, who is the head of the Eda haChareidis (and who has been since his predecessor’s death in 2003). Rashi’s comment concludes, however, by referencing a passage in the Talmud from פרק המדיר את האשה in Tractate Nedarim. המדיר את האשה (haMadir et-haIsha), in Mishnaic Hebrew, refers to prohibiting a woman from her husband by means of an oath. Taken on its own however, it is an allusion to the exclusion of women in general, both from public life and from positions of authority.
The “Talmud” then continues to extrapolate from biblical texts precisely why dressing in Holocaust-related costumes might be construed as an obligation, deducing that it is in order to mourn for the work of the Zionists, who anger God as much as idolatry and murder. This last point is made in the name of Rav Aharon Hasida – Rav Aharon “the hasid”, that is: an allusion, of course, to Rabbi Aharon Roth. Reb Arleh (as he is known) was the founder and rebbe of Shomer Emunim, which has since split into Toldos Avraham Yitzhak and Toldos Aharon. The “Rashi” commentary here references Tractate Bava Maaseh in support of this observation!
The Talmudic explication of the second rule within the mishna commences with a question: is it possible that all ears convey impurity in a tent? Have we not learnt that the ears of pigs and rabbits convey impurity by touching and by carrying only? To this, Rav Shakh responds by noting that the Zionists have already eaten all of the pigs and rabbits, and that (as is pointed out by Rabbah in Chullin 71a) a swallowed impurity does not further contaminate.
The allusion here is beautiful: in 1990, Rav Shakh (who was then the leader of the Lithuanian political party, Degel haTorah) delivered a speech that was televised around the country. In it, he accused secular Israelis of having strayed from Judaism, of not even knowing what Yom Kippur is, and of being “breeders of rabbits and pigs”. [This infamous speech, which has come to be known as the rabbit and pig speech, can be viewed onlinehere. The subtitles are none too accurate at times, but I intend to provide a transcription at a later date.]
Finally, the Talmudic analysis concludes with an explication of the Mishna’s third and final rule – that, “in actuality, they said: all rabbinic supervisions are invalid save for that of the Eda haChareidis”. According to Rav Rubin (an allusion to Rabbi Avraham Rubin, who heads the Edah’s kashrut authority: Badatz Mehadrin), this is to exclude the supervision of the Israeli rabbinate in particular. As “Rashi” points out, the hatred of the rabbinate has its source in the first chapter of Avot. This is a reference to Avot 1:10, in which Shemaiah declares that one should despise positions of authority (ושנא את הרבנות) – or, that one should “hate the rabbinate”.
But is it not obvious that the supervision of the rabbinate is invalid? After all, the rabbinate is comprised of Zionists! Rather, says Rav Landau (perhaps an allusion to Rabbi Moshe Yehuda Leib Landau – the Av Beit Din of Bnei Brak), the mishna’s ruling is designed to exclude the supervision of Rav Ovadiah Yosef, whose bet din (in the Rashi-style commentary) is deemed a “permissible” bet din.
You can read the rest  of the article here:
http://benabuya.com/2015/03/04/a-purim-parody-though-not-by-me
Posted by Eliezer Reinstein